The solo traveler planning a visit to the Asia-Pacific region will often think of such places as Bangkok, Hong Kong, Bali, or Australia’s Gold Coast as the best place for the solo traveler. While I’m not knocking any of these places, there’s one place in Asia that is a great place for the single guy or gal to have a great time that’s not usually on the list of places for the solo tourist – Chiang Mai, Thailand. Formerly the capital of Lanna, Chiang Mai gets a lot of tourist traffic, but is often underrated as a destination. 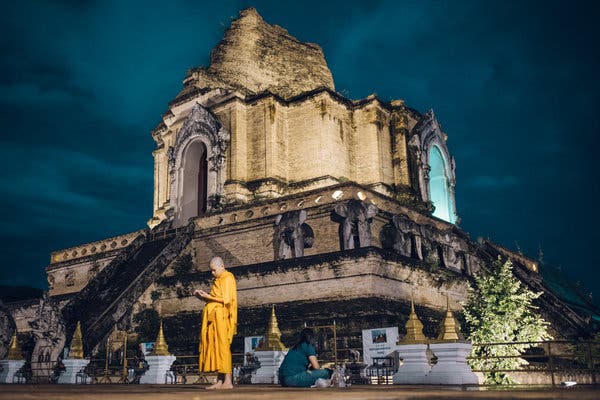 Chiang Mai, in the north of Thailand, is the country’s fifth largest city, with over a million people in the metropolitan area. Situated on a plain that is at an elevation of 316 meters, Chiang Mai is surrounded by lush countryside and mountains, making it greener, cooler, and quieter than Bangkok. Like Bangkok, though, it has a significant expatriate population, and offers much of the same entertainment, but with a quieter northern flair. While it has grown considerably in the 23 years since I first visited, and traffic has increased, its streets are practically deserted compared to the immovable snarl that is Bangkok traffic.

The Rose of the North

Located a few hours’ drive from the famed Golden Triangle, where Thailand, Laos, and Burma (Myanmar) meet, Chiang Mai is a great jumping off point to see the natural wonders of the region. Temple Doi Suthep, a mountain-top Buddhist retreat, is just outside the city limits, and is a great place for biking, hiking, or just sitting contemplating the fantastic view. Hill tribe villages on the outskirts of the city cater to foreign visitors with local delicacies and elephant rides, and a glimpse of Thailand’s prehistoric past.

The greatest thing about Chiang Mai, though, is the city itself. The last capital of the northern kingdom, it still has temples and royal structures from that era. A moat in the city center surrounds temples and other structures that are more than 700 years old, and a visitor can stroll or bike through the area by day or night. Just outside the moat is the night market, filled with handicraft shops, restaurants, and night clubs that will rival anything found in Bangkok. After a day of strolling through the old city, you can enjoy a meal of northern sticky rice with mangos, washed down with cold Singha beer, and then spend the rest of the evening shopping or being entertained at one of the kick-boxing or music bars.

There are daily flights from Bangkok to Chiang Mai’s airport, which is located just a short drive from the city center. The overnight train from Bangkok’s main train station deposit you even closer to down town Chiang Mai, where taxis or tuk-tuks will take you to your hotel. The truly adventurous can take a motorbike taxi, but I strongly recommend against this, as motorcycle accidents are one of the main causes of death and injury in the city.

Chiang Mai, in the 1980s, had four or five international standard hotels, and hundreds of small, cheap inns for the budget tourist. Nowadays, that has all changed. The city has nearly twenty hotels that are rated four- or five-star, offering all the conveniences you will find in any other major Asian destination.

My favorite hotel, because of its convenient location in the center of town, is the Dusit D2, Chiang Mai.

The Elephant Camps of Chiang Mai

Next
Scroll back to top